What Dreams May Come. 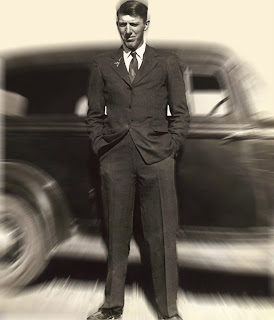 So the other night I had a dream about my paternal grandfather Walter McGuire. Now before I tell you about the dream you have to understand my relationship with my grandfather or grandpa as I called him.

Next to my dad my grandpa was one of the hardest working men I know and he was all about getting things done that needed to be done. Now keep in mind as a young man I didn't fully appreciate his work ethic because I was a kid and didn't care that much about hard work and the benefits it gives a man.

Grandpa wasn't a man they wore his emotions out on his sleeve, he didn't give you a hug and told you he loved you all the time but with him you just “knew it”. He wasn't mean but he was very serious about the work that he did. If he had you working with him he would kind of bark orders to you but you could tell that he was trying to teach you something, and make you believe it was something that you needed to know to survive in life. He was always trying to help you in some way even though at the time it may not seem like it.

Now grandpa wasn't all work, he played too and knew the very definition of having fun in his own way. And he had his own ways of spoiling (to a degree) his grandchildren. I can remember when I was at least seven or eight years old grandpa let me drive the riding lawnmower by myself, with his very close supervision of course. But it was one the coolest moments in my life at the time. And then later that day he let me drive his truck while I was riding in his lap because I couldn't reach the pedals. Once again very cool moment.

There are at least a few thousand memories that I will cherish the rest of my life but I won't mention them all here but I think you get the point.

Now from the time I was born until I was nine years old my parents, siblings and myself all lived in Kiefer, Oklahoma and grandpa and grandma McGuire lived outside of Kellyville, Oklahoma and I didn't get to see them all the time but it was pretty often. But grandpa had a great idea and he decided to give all his kids 20 acres of his land each. So my dad had an ever better idea and decided to move us all out there onto the new land and I was able to visit with grandpa and grandma more often.

Well as someone once said all good things must come to an end. Just a short time after we moved nearer to grandpa he began getting sick and soon we learned that he had been diagnosed with cancer. Now as a young man I knew a lot of friends and relatives that had been sick with one thing or another but at that age I knew nothing of cancer. I just figured at the time grandpa would get better and things would be back to normal. That was until one day my father told me that the hospital was sending grandpa home but that he wasn't getting any better but in fact was getting worse. That was my first indication that grandpa wasn't doing so good.

My fears were confirmed later on when all the family was at grandpa's and us young kids weren't allowed in the house for very long because grandpa was in a hospital bed in the dining room so that he could be easily cared for. One day I needed to go into the house to use the bathroom and my mom told me it was okay and I had to walk past grandpa on the way to there. What I saw there changed me forever. My grandpa, whom I hadn't been able to see for a while was a lot skinnier than I remembered and he was lying in bed with all his children around him.

My dad was talking to grandpa and I paused briefly to take a look at grandpa and was secretly wanting to talk to him. It was then that one of my aunts asked my if I wanted to say hello to grandpa and I said yes and she told me it would be okay. I then took a few steps closer to him and said “Hi grandpa” and received no response other than a blank stare from his face. He looked at me very confused and it became quickly clear that he didn't recognize me, it was a very sobering moment for a young man. And it was then that I began to accept that his time with us here was getting shorter by the day.

A few short weeks went by and the inevitable happened and grandpa passed away and I watched in horror as I seen my loved ones weep in sorrow and some that I had never seen cry before witch was equally traumatizing. As you can imagine this was a hard time in my young life and in time I learned to deal with it but those times didn't come without a few short periods of missing him in my life and feeling depressed that he wasn't there. But I did manage to cope and continue on with my life.

But from time to time I would have the occasional short dream about grandpa doing something or hearing his voice but they were always short and left me wanting more but as always I dealt with it and moved on. That is until recently. As I said when I started this essay I recently had a new dream about grandpa.

The dream I had was fairly short but was also very realistic and very cryptic. The dream goes as this and starts with nothing more than just knowing that grandpa is back and he is alive. But how could this be, he had been dead for years. Then the visual scene opens and I can see grandpa sitting in his dining room but not at a table just in a chair in an odd place among a crowd of relatives that I could not make out. Now I was standing across the room looking at him sitting there as he was listening intently to the conversation that the men sitting around him were having.

I became overwhelmed with emotion and acceptance that this was really happening so I stepped closer to him, but as I did the traffic of relatives passing between us going in and out of the kitchen became more and more frequent. It was then that grandpa noticed me. He looked me right the eyes. It was amazingly clear and real. He was sitting there looking about the age he was when I was very young wearing a lite blue long sleeved button up shirt and wearing his glasses and seeming very real.

I spoke out to him but I can't remember verbatim exactly what I asked but I know it had something to go with the idea of “are you here to stay”. And he looked at me even more intensely but he wasn't smiling at all and had a look on his face that told me he had something very important to tell me. But the traffic between he and I became even more frequent and I could tell he was getting frustrated but after a few moments I discovered that it wasn't the people flowing by us that was the focal point of his frustration, it was the fact that he couldn't speak to me at all was the thing that was aggravating him. He kept trying and trying but he couldn't get the words out.

And finally he just looked at me defeated with a look of soft despair as if to say “I can't say the words, but you already know the answer to the question”.

Now as you can imagine I woke up with tears in my eyes and in total disbelief of what I had just dreamed. But as I became more aware of what had just happened I became more at peace with the message I believe was being conveyed to me, witch I feel was the notion that it's okay to remember your past, but it's not okay to live there.

It was so ironic because during that time I had been fixated on “the way things used to be when I was a kid” and the differences of our lifestyles then compared to the present day. I think it was just someones clever way to tell me to live life one day at a time, do the right thing and try to make the world a better place in my own special way.
This much is for sure. This is one dream that will live in my heart until the day I get to see grandpa once again.