Hello again everyone I hope this new BLOG post finds you all well. I am sorry that it has been a while since my last post but the holidays proved to be quite overwhelming. As you may or may not know but we had a blizzard here in this part of Oklahoma and well, as much as I wanted a white Christmas this one was quite unwelcome.

You see on Christmas Eve night a very rare Oklahoma Blizzard blew in and dumped a considerable amount of sleet and snow on us and incredible winds came with it. I was supposed to drive to the next county and pick up my daughter and son for Christmas but the weather made it impossible. I then thought well, maybe I will be able to pick them up in the morning. Well I was wrong.

Then next morning my wife and youngest daughter woke up and wished each other a Merry Christmas and then eagerly opened our presents. Wow what presents I received this year, but I’ll get back to that part later.

After the presents were opened and the thank yous were exchanged we had ourselves a little festive Christmas breakfast of bacon and eggs, and afterwards I began to formulate our chances of actually getting to travel. Well It just wasn’t in the cards that day, yes we did try and slid off into a ditch once and did escape the clutches of defeat but the traveling conditions proved too much and we soon after returned home defeated.

My biggest regrets were that I didn’t get to see Tyler and Tayler’s shining faces on Christmas Day but it was only the second time in my life that I didn’t get to see my parents on that day we celebrate the birth of our Lord Jesus Christ. But through the wonders of technology we made our phone calls and exchanged our Christmas greetings in the only way we could at the time.

But enough of the sadness I did mention gifts earlier so let me share that not-so-little tidbit with you. I wasn’t expecting too much for Yule Tide gifts this particular year but man oh man did I get some good gifts. The first was a pretty good sized gift box wrapped in the customary fashion in the festive wrapping paper for the occasion, sort of heavy but not too much.  I ripped into it like an over anxious 10 year old boy would and lo and behold inside was a miniature version of the infamous “Leg Lamp” from the movie “A Christmas Story”. I laughed so hard I nearly peed myself. It was wonderful, my wife Amy is the greatest she truly knows what makes me happy.

Well the first thing I had to do was plug it in and put it into the window, then I had to say the words “Only one thing could’ve dragged me away from the soft glow of electric sex gleaming in the window, and that’s Little Orphan Annie” don’t read anything else into that it’s just a quote from the movie. You see I must have watched that movie about a million times and it never gets old. Truly a Christmas Classic for the ages.

But I digress; I also received a second present. Truly surprised I was to get a second gift because I surely did not deserve it and I could not think of anything that could top the first gift. But I was wrong. I had received from my lovely wife a GPS. Wow I have always wanted a GPS. You see about a year or so before my oldest son purchased a GPS and I borrowed it from him a few times on some of our vacation trips and it came in real handy, as a matter of fact I became a little spoiled to it. So in typical husband fashion I began dropping the proverbial hints to my wife throughout the year in hopes that my subliminal messages would convince her to get me one for a gift for any occasion eventually.

Well my evil plan paid off and I received the ASUS R700 GPS for pedestrian or automobile use.

I was super excited because this was not your run of the mill GPS this thing had features! Aside from the mobile GPS function it has Bluetooth functionality for using your cell phone hands free. And it plays MP3’s and Videos and displays your favorite pictures that you load onto it.

Then I read on in the owner’s manual I discover that it has an FM transmitter so you can hear the music or GPS voice over your car stereo speakers, hmmm not bad at all. Then I find this function called TMC (Traffic Message Channel) receiver. It receives a signal transmitted over local radio station channels that sends out traffic information that the GPS receives and warns you about so that you can avoid the delay on your route.  It also came with and awesome windshield mount and all the accessory cables needed to get going right away.

Well I had to get this thing up and going and try it out all these functions. I soon discovered that the unit came with a micro SD card and it holds all the map information. Well the second time I turned the unit on the micro SD card crapped out and died. After much disgust I borrowed one from my daughter and carried on. After 8 hours or so and much research on the internet I figured out how to reload the software on the card and finally had the unit operational again.

Well for the following week I began to put the new Asus R700 GPS thought its paces and the further I went the more I was disappointed. To keep from dragging it out too much I will summarize its downfalls.

The video player did not play video for more than 1 second, the FM transmitter does not work for the phone which would be nice because the internal speaker is so low that you can’t hear the party you are speaking with unless you are at a full stop. The GPS could not find half the addresses I entered into it. Sometimes when you stop the map on the GPS would spin around. The default view is 2D and I prefer 3D view and it would change itself back to 2D randomly and often.

So I was finally let down enough by the Asus R700 my wife convinced me to return it for a refund and buy the one I want.  Well I finally agreed and began researching and most of the positive reviews leaned towards GARMIN and the long line of GPS products.

Mind you the Asus R700 retailed for over three hundred dollars but Amy found it on sale for a hundred so I had limited funds to work with. I eventually found the Garmin nuvi 265t and it was very surprising. 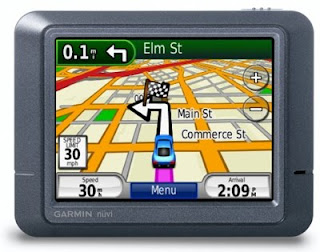 Granted it does not have nearly the same amount of features of the Asus did but it was close. I found that it does have Bluetooth for hands free operation of your cell and it had the TMC receiver function with the included USB cable that had the TMC receiver built in. The nuvi 265t also displays your favorite pictures and has a slot for an optional micro SD card.

It too came with an awesome window mount and an option for a temporary dash mount. And it also came with all the cables and documentation needed to get you going right out of the box. But here is what made me decide to keep it.

When using the Asus R700 the first trip I had it set to was the address of my Mom and Dad’s home near Tulsa, Oklahoma. Well it just couldn’t get it done it became confused and it tried to send me the wrong way. The GARMIN however sent me right where it was supposed to.  And while at my parent’s home the mail came and well, they had received someone else’s medication in the mail by mistake. So being the good Christians we try to be we looked up the parties number in the phone book and gave them a call and we explained the mistake and advised them we would be right over with their mail.

My father and I went out to my truck and typed in the address and let me tell you it took us to the exact spot we needed to be in. It was just the icing on the cake to tell me that I had made a good choice.  And as a side note on the way to my parents house the TMC feature advised me of a 1 minute delay in travel time, I suspect due to the ice storm that was underway at the time. Coincidentally the TMC feature on the Asus never would lock onto a signal.

That day everybody won. I am not normally the writer of product reviews but this one is mine. The Garmin nuvi 265t is worth every penny. The whole experience kind of reinforces my theory of expect the worst but hope for the best.

I would like to wish you all a very Happy New Year and my God Bless You and Keep You!
Posted by Fred McGuire Jr. at 9:48 PM No comments: