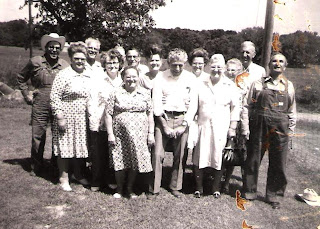 Some of my biggest concerns as a child was who I could get to play with me that day or were there any cookies left in the cookie jar and one I remember the most was how many pieces of bacon I would get at the breakfast table. You see I was the youngest of five kids in our family and only one of my parents worked, because my wonderful mother was a housewife, and we lived on the conservative side of life. But that wasn’t a bad thing; there was always plenty of love to go around. But it is pretty obvious to all of us that our concerns as children are completely different than what they are as adults.

My brother and I had to share a bed for many years and I was always a little jealous that he was the one that slept closest to the bedroom window in the summer and I could never convince him to switch sides of the bed with me. We didn’t have air conditioning so in the summertime at night my dad would turn on our attic fan which would draw air into through the windows creating a breeze; witch on an Oklahoma summer night was very comforting to sleep to. So as you can imagine the person sleeping closest to the window received all the benefits of the cooling breeze. It never failed my brother would end up sleeping on his side and create this human wind break that blocked most of the breeze from me and I would wake up in the night sweating. Don’t get me wrong I didn’t hate my brother for any of this; I just learned to accept it as we do with many things throughout the course of our lives.

Then when I was about eight years old a marvelous thing happened. My brother and his girlfriend were married and he moved out leaving me to be the only male child left in the house which was glorious because that meant that not only did I get a bed to myself, sleeping next to the window, but It also meant that now I had the whole bedroom to myself. It was some high times for me. Then one smaller miracle occurred at the first breakfast we had after my brothers marriage was when my mother gave me two pieces of bacon instead of one. It kind of made me feel like I was almost all grown up. It’s amazing what life teaches us as we get older.

For some unknown reason I was always very fascinated with “The Old Days” I always heard the older folk s talking about. The little stories I always heard the grownups speak about from time to time interested me immensely. But as time went on and I became a teenager I found other interests and such as the opposite sex and my social life with my friends and spent more and more time away from my family and thought nothing of it.

Years later my brother and I began working on our family tree research and started collecting old photos and videos from our family members and one in particular almost broke my heart. My brother and I acquired a copy of a wedding video of one of our cousins from the 1980’s and I remembered that was then year that many of our relatives from California were in town. It was a momentous year because the McGuire elders had planned a large family reunion that year and I mean all the family came in from California and Oklahoma.

Well after the wedding video was more content that covered a large part of the dinner of the family reunion. My Aunt Pat operated the video camera at the end of the food serving table so that all that made themselves a plate to eat could be recorded and a little part of our history preserved.

Then after the meal most of the younger members of the family gathered outside for a usual game of volleyball while the elder members stayed inside in the cool air to visit and catch up and talk about “The Good Old Days”.

It was toward the end of the video I began to wonder and ask myself, “Where am I”? I could remember the wedding ceremony almost vividly but did not recall the family reunion at all. The more I searched my memories there more I began to realize the truth. The answer was simple. I just wasn’t there. The why I wasn’t there was the sad part.

As a teenager with something to drive I was not to be bothered with too many family events. Ever since I had obtained my license to drive and obtained my first vehicle, the world to me seemed almost limitless and I had to get out there as much as I could and experience it. While some of that is okay, I realize now how much of my family I missed out on.

Now I realize that even when I was a teenager that going to every single family event wasn’t the most practiced activity. But I also remember that before I was old enough to drive that my mother and father did take me to a lot of family events. And when I say “take me” I meant dragged me to almost every family event. Now don’t get me wrong, I love my family and most of those events I wanted to go to. But the events I didn’t care to attend and had to kind of rubbed me the wrong way. But a lot of that was just being a teenager with growing pains.

As I said before I love my family, and I mean everyone in my family. We may not be best friends with all of our family members and we may not like everything they do, but at the end of the day they are still our family. I don’t love them because I have to; I love them because I want to.
Now since my brother and I began the family research I began to realize how much information I missed out on, but most of all how much heritage I missed out on. I was told once by my Junior High history teacher, Phyllis Holcomb, that we should sit down with a tape recorder now with our grandparents and have them tell us about their childhood and their “Good Old Days”. She said it was some of the most valuable information we could ever have, and she couldn’t have been closer to the truth.

Now I am not preaching to you on how to raise your children or live your life. I am just saying it is something to ponder on while you take your steps through the lonesome pathways we walk through in this life. You never know what or who you will find along the way.

An unknown wise man once said “For one to know where they are going in life, they must know where they come from”. I never gave that quote much thought as a young man, but today it speaks volumes to my soul.
Posted by Fred McGuire Jr. at 1:17 PM 2 comments: